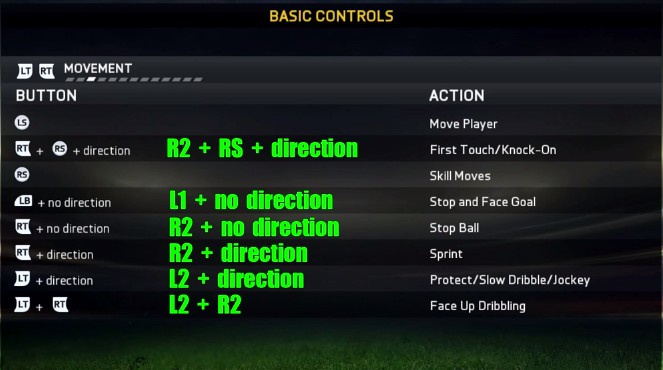 What’s effective attack in a match?Probably is dribbling ball,each team needs to several players who are skilled in dribbling.It’s also very significant in fifa15.Here are some basic operation about dribble ball,come and collect it!

Two purposes of Dribbling:
1).To control the match tempo. Player can control ball with his feet to extend the time and plan a chance to attack.
2).To pull space. This is beneficial to passing or shooting.

At the beginning, do you feel that you have a little scrambling? Use your four finger o control LB, LT, RB, RT. Personally, I think this is the most correct way. You have to so skillfully use this operation that it becomes a conditioned reflex. Only in this way, you can play UT.

1. You first are familiar with the LS operation, because every player has different controlling proficiency and dribbling speed. It is recommended to the sideline and midfield players use the operation: defender does not do dribbling operation.

2. Learn to use LB + NO DIRECTION. This is the emergency stop operation. It is easy to grasp.

3. RT + DIRECTION is fast dribbling. This operation can make the ball farther away from the body. Initially, the novice can press. Then to combine with 2 3, it is useful to pass at an angle of 45 degrees from the side. When faced opponent defenders or the defensive players in the side sprint, you judge the direction in advance and then dribble the ball in the opposite direction. If you are skillful, you can use a feint to deceive opponents to made the wrong direction.

4. LT + DIRECTION. It has the effect to dribble in low speed and retain the ball. When you are surrounded or entangled by opponents, you can use LT + DIRECTION. Do not blindly forward quickly, it is important to disrupt the opponent’s rhythm and ideas. Especially, when your back is against defensive players, this operation is very effective. For example, as you are pushed to the bottom line, the operation can form an effective attack and run out of the surrounding.

5. RS is the skill operation.

6. LT + RT. this operation is used when Defender does Lob pass or Midfielder missed the ball, so as to make Frontcourt players form a favorable situation.

What above is the basic operation about dribble,I hope it would be helpful to you in playing fifa15 ultimate team,and have a good time!